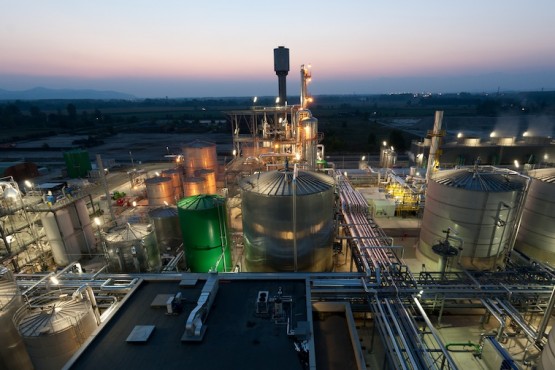 The world’s first plant able to produce cellulosic biofuel at commercial scale using enzymatic conversion recently opened in Crescentino, Italy. When it’s fully up and running, the plant is expected to deliver 75 million liters (just shy of 20 million gallons) of ethanol to the European market.

Admittedly, the “world’s first” title rests on narrow grounds. The plant uses a particular process developed by its owner, Beta Renewables, that first breaks raw materials down into sugars using enzymes, and then converts those sugars into ethanol through fermentation by bacteria.

Another commercial-scale cellulosic ethanol plant is already up and running in Florida, but it uses a different process in which gasification — exposure to high heat — transforms the raw materials into a mix of carbon monoxide, carbon dioxide, and hydrogen called syngas. The same fermentation process then converts the syngas into ethanol.

The Florida plant is anticipated to produce 8 million gallons of biofuel a year when it’s fully up and running. A plant in Emmetsburg, Iowa with a capacity of 25 million gallons is in the works, as is a 30 million gallon facility in Nevada, Iowa, and a 23 million gallon set up in Hugoton, Kansas. The current conventional wisdom says that large-scale commercial production of cellulosic biofuel remains out of reach, and the target set by the federal government’s renewable fuel mandate is too high. But that may not be the case much longer.

Cellulosic biofuels come with two big advantages. First, the raw materials are things like plant waste from agriculture, wood products manufacturing, and lawn maintenance. Unlike corn-based biofuel, those are feedstocks that don’t compete with human food supplies. Second, these are feedstocks from agriculture that would’ve taken place with or without the demand from biofuel production, so the biofuel itself isn’t adding to the total amount of agriculture already taking place. That’s good because the businesses of growing and harvesting crops tends to involve a lot of carbon emissions in its own right, and because converting natural forests and grasslands into cropland reduces the overall amount of carbon the land can remove from the atmosphere. If a biofuel drives new agricultural activity, it loses most or even all of its benefit in terms of fighting climate change.

Other advances in cellulosic biofuels are also on the horizon. For instance, a University of Wisconsin-Madison team recently figured out a version of the enzyme-plus-fermentation process that allows both steps to occur within the same bioreactor, thus cutting down on capital and implementation costs. (Though Beta Renewables boasts a “fully integrated process design” that it says also cuts down on capital costs.) The Wisconsin-Madison team also produced isobutanol rather than ethanol, which packs considerably more heat energy per gallon.

Ritesh Pothan, is an accomplished speaker and visionary in the Solar Energy space in India. Ritesh is from an Engineering Background with a Master’s Degree in Technology and had spent more than a decade as the Infrastructure Head for a public limited company with the last 9 years dedicated to Solar and Renewable Energy. He also runs the 2 largest India focused renewable energy groups on LinkedIn - Solar - India and Renewables - India
View all posts by Ritesh Pothan →
This entry was posted in Biofuels, Power Generation and tagged Beta Renewables, Biofuel, cellulosic biofuel, Cellulosic ethanol, Crescentino, Ethanol, fermentation process, Florida plant, Hugoton Kansas, Renewable Energy, University of Wisconsin–Madison. Bookmark the permalink.