India at #8 in Renewable Energy Investment while China at #1

For the second year, an annual Pew Charitable Trusts report, “Who’s Winning the Clean Energy Race?”, shows that China is the world leader in clean energy investment, with $54 billion in investments in renewables in 2013, well above total U.S. investment of $36.7 billion.

“No other clean energy market in the world is operating at that scale,” Phyllis Cuttino, director of Pew’s clean energy program, said during a teleconference Thursday, referring to China.

The report was released just days after the Intergovernmental Panel on Climate Change released the second part to its fifth assessment report, which states unequivocally that people will have to adapt to a world in which human fossil fuel emissions have caused the climate to change, threating lives across the globe as temperatures and seas rise and extreme weather becomes more frequent. Developing renewable energy is seen as one of the primary ways to reduce humans’ impact on the climate. 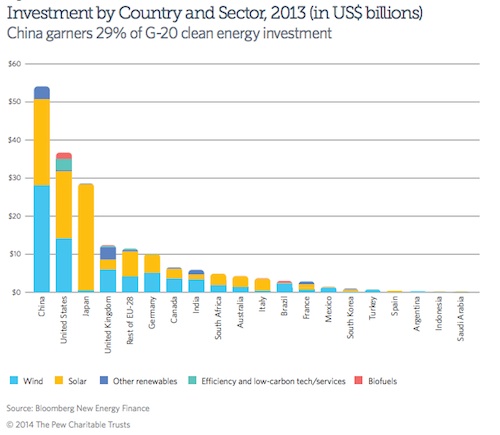 “Globally, we were second for wind and third for solar investment,” Cuttino said.

Ethan Zwindler, head of policy for Bloomberg New Energy Finance, said during Thursday’s call that 2012 was a record year for U.S. wind power installation ahead of the expiration of the Renewable Electricity Production Tax Credit, or PTC, passed in 2009 as part of the American Recovery and Reinvestment Act.

There is likely to be a resurgence in wind farms coming online in the U.S. in 2014, many of which were under construction last year and will benefit from the PTC, Zwindler said.

“The PTC still does very much matter to the U.S. wind industry,” he said. 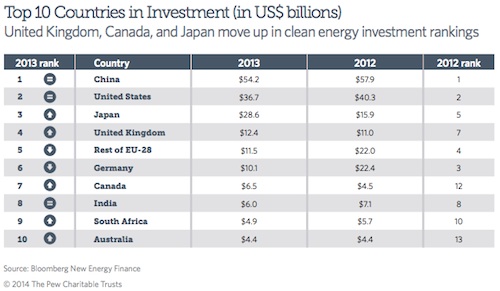 Another important finding in the report is that for the first time, solar power installations eclipsed wind farm construction globally last year.

“One-third of all solar on the planet was installed last year,” Cuttino said. “Deployment of solar was up 29 percent. Falling prices are really driving technology and deployments around the world.”

Zwindler said the solar and wind power industries worldwide are in a transition period as subsidies for renewables are scaled back, especially in Germany and Italy, but he is confident renewables will be able to compete in the future with few subsidies.

“It does not take place in all places at the same time,” he said. “If you’re in a sunny part of the world with high electricity prices, putting solar on your roof clearly can make more sense.”

Ritesh Pothan, is an accomplished speaker and visionary in the Solar Energy space in India. Ritesh is from an Engineering Background with a Master’s Degree in Technology and had spent more than a decade as the Infrastructure Head for a public limited company with the last 9 years dedicated to Solar and Renewable Energy. He also runs the 2 largest India focused renewable energy groups on LinkedIn - Solar - India and Renewables - India
View all posts by Ritesh Pothan →
This entry was posted in News, PV, Renewables, Solar and tagged Canada, China, clean energy, India, Pew Charitable Trusts, solar energy, solar photovoltaic, Solar PV, USA. Bookmark the permalink.
%d bloggers like this: