Ritesh- While this may be for the US, it’s also true across the globe and can be so for our country too except that we don’t have a transparent view into the going ons in government.

Yesterday, Ohio became the first state in the nation to pull back its clean energy targets, with State House members voting mostly along party lines to approve a bill freezing the state’s renewable energy and energy efficiency benchmarks for the next two years.

Supporters of the measure repeatedly cited concerns over costs to consumers, but both the Public Utilities Commission of Ohio (PUCO) and regional utility FirstEnergy have confirmed that the energy efficiency programssave customers far more money than what they cost and will continue to save billions more dollars. The state’s renewable energy policies have created tens of thousands of jobs across hundreds of businesses.

Not to mention RPS opponents’ misguided belief in the myth of a “free market”for electricity, which doesn’t exist in most U.S. states.

“This bill is all about FirstEnergy’s desire for its unregulated affiliate that owns power plants to sell more electricity, and eliminating energy efficiency makes it possible for the company to do that,” said Rob Kelter, senior attorney at the Environmental Law and Policy Center.

But Ohio’s RPS freeze is part of something much bigger. It’s the latest example of the loosely organized, well-funded network of influential organizationsrepresenting big business and fossil fuel interests that have formed the backbone of attacks on state-level renewable energy policies across the country. Up until recent developments in Ohio, those efforts had beenrepeatedly swatted away.

Many supporters of Ohio’s SB 310 received contributions from FirstEnergy. But there are also connections to the usual suspects, most notably the infamousAmerican Legislative Exchange Council (ALEC) and the Koch brothers. Sen. Bill Seitz (R-Cincinnati), one of SB 310′s leading backers, is an ALEC board member.

A new report from the fledgling Energy & Policy Institute seeks to pull back the curtain on these coordinated efforts, revealing just where the messages, influence and money are coming from. The report tracks current RPS battles in more than a dozen states, illustrating the coordination and depth involved in the campaigns against renewables. It also attempts to track the “dark money” flowing to these organizations through big donors.

“The threat is real,” said Gabe Elsner, executive director of EPI. “The fossil-fuel industry has enormous resources to continue to attack clean energy.”

First are the paid-for think tanks that generate misleading or outright false conclusions, such as the Beacon Hill Institute. Then come Americans for Prosperity (AFP) and the Heartland Institute, which point to those studies to decry clean energy policies and their supposedly negative impacts.

Groups like AFP approach from the grassroots side (funded by corporate interests) to spread the message to the public via advertisements and mail campaigns. And lobbyists representing fossil-fuel interests wield their influence from campaign contributions to direct meetings with legislators to push their agendas.

“The real genius of this attack by special interests is the widespread use of additional front groups to lobby, spread misinformation, and pressure decision makers to eliminate clean energy policies,” the report notes.

Take Kansas, for example. During the recent Kansas RPS debates, the Koch brothers-funded Americans for Prosperity alone spent nearly four times as much as did renewable energy advocates. Dozens of legislators also have ALEC ties. But even in the Koch brothers’ home state, they still couldn’t beat the local farmers who touted the value of wind to their operations and communities.

Pulling back to the national stage reveals the overlapping messages, and messengers, involved in the broader efforts, as the following chart indicates. 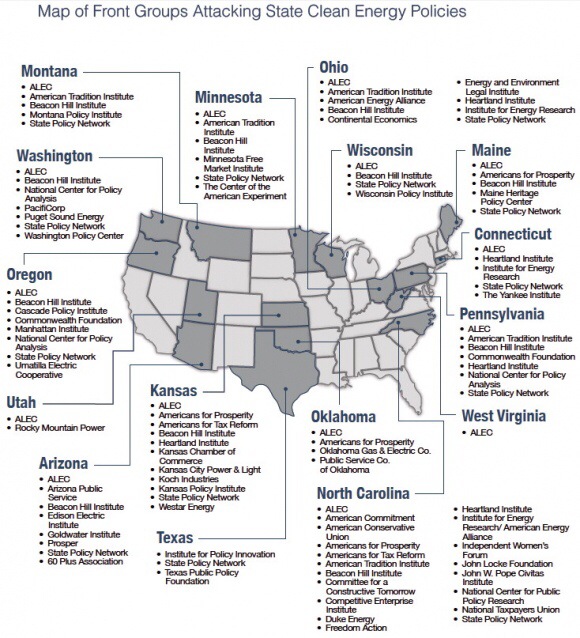 It’s not always easy to reveal these connections, though eventually lobbying records are released to show who’s throwing their weight around.

“Really, it’s a spider web of ways to get in and [exert] influence,” said Elsner. “All the different pieces fit together to exert enormous pressure on legislators.”

AFP doesn’t lobby directly, but it spent hundreds of thousands of dollars to blanket Kansas airwaves with claims that the RPS raised electricity bills by 40 percent. The ads were flat-out lies. The state’s own Corporation Commission said renewable energy targets had contributed to a 0.16 cents per kilowatt-hour increase — about 2 percent of utilities’ revenue requirements (PDF).

Elsner noted that the groups are becoming more clever, shifting their message to more chambers of commerce, as well as to Donors Trust groups through which they can push massive and anonymous donations. Greenpeace revealed a correlation between a drop-off in Koch foundation funding and a ramp-up in Donors Trust activity.

It would indicate some measure of progress if these conservative groups that are ideologically opposed to current RES/RPS policies offered legitimate alternative plans to support renewable energy efforts. Instead, they’re hiding behind the veil of the free market and the need for less regulation, while remaining silent on the decades of policies and taxpayer dollars that have supported the interests of their backers in the fossil fuel industry.

It’s a case of “the dominant market force trying to squash its competitors,” said Elsner.

Ritesh Pothan, is an accomplished speaker and visionary in the Solar Energy space in India. Ritesh is from an Engineering Background with a Master’s Degree in Technology and had spent more than a decade as the Infrastructure Head for a public limited company with the last 9 years dedicated to Solar and Renewable Energy. He also runs the 2 largest India focused renewable energy groups on LinkedIn - Solar - India and Renewables - India
View all posts by Ritesh Pothan →
This entry was posted in Climate Change, Coal, Fossil Fuel, Global Warming, Greenhouse Gases, Pollution, USA and tagged Coal, Fossil Fuels, Natural Gas, Solar, solar energy, Solar Power, Solar Subsidy. Bookmark the permalink.
%d bloggers like this: