Toyota is creating a combustion engine that directly generates electricity

Electric vehicles have come a long way in recent years, but even the premium-priced Tesla cars are short on range compared to good old internal combustion. Gasoline is probably going to remain part of our transportation makeup into the foreseeable future, even if only as a component in hybrid vehicles. 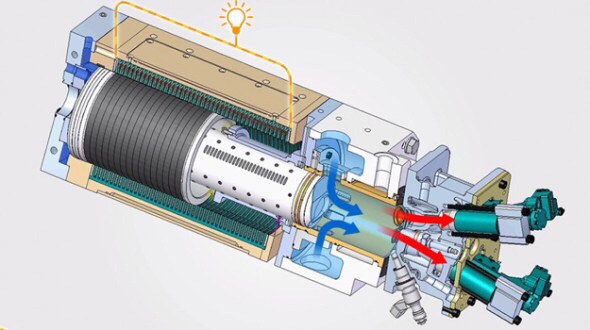 However, we can still refine internal combustion to make more sense in a hybrid, which is exactly what Toyota is doing with its new Free Piston Engine Linear Generator (FPEG).

Linear engines have been in development for a few years, but Toyota’s version is the first one that might be viable in a real vehicle. Linear engines lack the rotating crankshaft of traditional internal combustion. Instead, there is one larger chamber where the burning fuel pushes a single piston back and forth. A regular car uses pistons to transfer energy to the wheels, but the FPEG is used for generating electricity directly.

The piston in this engine has a magnetic W-shaped cap, which sits in a separate compartment lined with stator coils. Each stroke of engine moves the W back and forth through the chamber. The permanent magnets passing over the coils results in the generation of electricity, which can be used to power the vehicle through the same electric motors a battery might use. The design is actually more simple than traditional engines and could be used in combination with plug-in systems.

Toyota’s test units are still a long way from production-ready. The most powerful FPEG engines are capable of 10kW, or about 13 horsepower. That’s not enough to get most cars up to highway speed, even if you’re willing to accept sluggish acceleration. This technology might debut in super-light commuter vehicles as a first step, but Toyota is aiming to extend the range of all hybrid vehicles with FPEG tech in the future.

Ritesh Pothan, is an accomplished speaker and visionary in the Solar Energy space in India. Ritesh is from an Engineering Background with a Master’s Degree in Technology and had spent more than a decade as the Infrastructure Head for a public limited company with the last 9 years dedicated to Solar and Renewable Energy. He also runs the 2 largest India focused renewable energy groups on LinkedIn - Solar - India and Renewables - India
View all posts by Ritesh Pothan →
This entry was posted in Electric and Hybrid Vehicles, Fossil Fuel, Global Warming, Low Carbon Emission, Pollution and tagged cars, Electric Vehicles, engineering, Hybrids, internal combustion, science, Toyota. Bookmark the permalink.
%d bloggers like this: