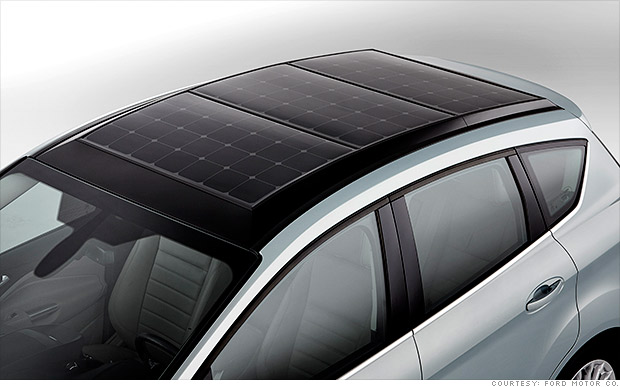 The solar cells in the new Ford C-Max Solar Energi, to be unveiled at the Consumer Electronics Show.

The car, a concept vehicle not ready for dealer showrooms, is a version of the C-Max Energi plug-in car already sold by Ford

Like the C-Max Energi, the new C-Max Solar Energi can go 21 miles on electricity between charges. It then can switch over and run on gasoline until it is recharged.

The concept car’s roof is covered with a solar cells provided by SunPower Corp (SPWR).

But because it takes awhile to charge, Ford has also teamed with Georgia Tech to offer a special car port for charging.

Ford calls it an “off-vehicle solar concentrator” — essentially, a magnifying glass that can track the sun as it moves across the sky. The car port boosts the power that can be collected from sunlight by a factor of eight, according to Ford, allowing a full 8 kilowatt charge over the course of a day. The glass was originally designed for a lighthouse.

Ford said its internal data show that the sun could power up to 75% of all trips made by an average driver. And it estimates that the solar C-Max could reduce the annual greenhouse gas emissions a typical owner would produce by four metric tons. 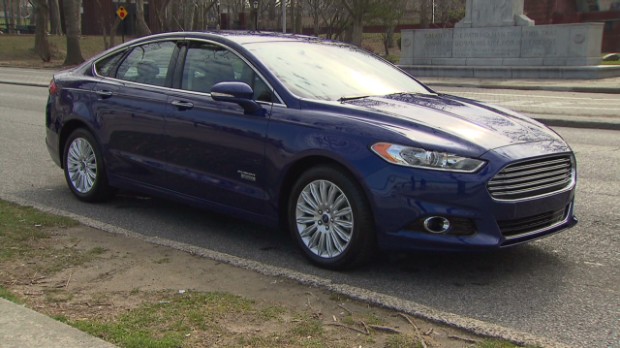 Besides the C-Max Energi, Ford also has a plug-in version of the Ford Fusion mid-size sedan, the Fusion Energi.

According to Ford, it sold about 85,000 hybrids, plug-in hybrids and all-electric vehicles in 2013.

Ford said it sold more plug-in vehicles in October and November than both Toyota Motor (TM) and Tesla Motors (TSLA). It also said it is now No. 2 behind only Toyota in the sale of traditional hybrid cars that do not have a plug-in option.