Climate Panel Stunner: Avoiding Climate Catastrophe Is Super Cheap — But Only If We Act Now

The U.N. Intergovernmental Panel on Climate Change (IPCC) has just issued its third of four planned reports. This one is on “mitigation” — “human intervention to reduce the sources or enhance the sinks of greenhouse gases.”

The first two reports laid out humanity’s choice as depicted in the figure above, which appeared in both reports. The first report warned that continued inaction would lead to 9°F warming (or higher) for most of the U.S. and Northern Hemisphere landmass, resulting in faster sea level rise, more extreme weather, and collapse of the permafrost sink, which would further accelerate warming. The second report warned that this in turn would lead to a “breakdown of food systems,” more violent conflicts, and ultimately threaten to make some currently habited and arable land virtually unlivable for parts of the year.

Now you might think it would be a no-brainer that humanity would be willing to pay a veryhigh cost to avoid such catastrophes and achieve the low emission “2°C” (3.6°F) pathway in the left figure above (RCP2.6 — which is a total greenhouse gas level in 2100 equivalent to roughly 450 parts per million of CO2). But the third report finds that the “cost” of doing so is to reduce the median annual growth of consumption over this century by a mere 0.06%.

You read that right, the annual growth loss to preserve a livable climate is 0.06% — and that’s “relative to annualized consumption growth in the baseline that is between 1.6% and 3% per year.” So we’re talking annual growth of, say 2.24% rather than 2.30% to save billions and billions of people from needless suffering for decades if not centuries. As always, every word of the report was signed off on by every major government in the world. 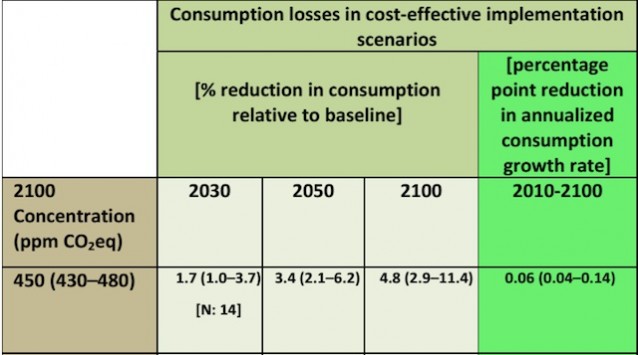 Global mitigation costs for stabilization at a level “likely” to stay below 2°C (3.6°F). Cost estimates shown in this table do not consider the benefits of reduced climate change as well as co-benefits of mitigation. The green columns show the consumption loss in the years 2030, 2050, and 2100 relative to a baseline development without climate policy. The light green column shows that the annualized consumption growth reduction over the century is 0.06%. Source: IPCC 2014.

Moreover, this does not even count the economic benefit of avoiding climate catastrophe. Afew years ago, scientists calculated that benefit as having a net present value of $615 to $830 trillion. That means our current do-nothing plan is actually far, far costlier than aggressive climate mitigation.

And the IPCC warns “Delaying is estimated to … substantially increase the difficulty of the transition to low, longer-term emissions levels and narrow the range of options consistent with maintaining temperature change below 2 degrees C.”

These are not new findings. In its previous Fourth Assessment (AR4) in 2007, the IPCC found the cost of stabilizing at 445 ppm CO2-eq corresponded to “slowing average annual global GDP growth by less than 0.12 percentage points.”

These conclusions should not be a surprise since they are based on a review of the literature — and every major independent study has found a remarkably low net cost for climate action — and a high cost for delay. Back in 2011, the International Energy Agency warned“Delaying action is a false economy: for every $1 of investment in cleaner technology that is avoided in the power sector before 2020, an additional $4.30 would need to be spent after 2020 to compensate for the increased emissions.”

As German economist Ottmar Edenhofer, a co-chair of the IPCC committee that wrote the new report, put it, “We cannot afford to lose another decade. If we lose another decade, it becomes extremely costly to achieve climate stabilization.”

The new IPCC report notes that renewable energy (RE) technologies have advanced substantially since 2007:

Since AR4, many RE technologies have demonstrated substantial performance improvements and cost reductions, and a growing number of RE technologies have achieved a level of maturity to enable deployment at significant scale (robust evidence, high agreement). Regarding electricity generation alone, RE accounted for just over half of the new electricity generating capacity added globally in 2012, led by growth in wind, hydro and solar power.

The IPCC notes, “In the majority of low stabilization scenarios, the share of low carbon electricity supply [RE, nuclear, and carbon capture] increases from the current share of approximately 30% to more than 80% by 2050.” That kind of rapid growth in near-zero-carbon energy over the next 3 1/2 decades leaves very little room for any new fossil fuel generation. The IPCC asserts that natural gas can act as a short-term bridge fuel if “the fugitive emissions associated with extraction and supply are low or mitigated” — which multiple recent studies make clear is not currently the case (see “By The Time Natural Gas Has A Net Climate Benefit You’ll Likely Be Dead And The Climate Ruined“).

In the scenario that gives us the best chance of avoiding catastrophe, stabilizing at 450 ppm CO2-eq by 2100, natural gas power generation must peak and fall “to below current levels by 2050″ — and decline further post-2050. So the world is already using more natural gas than it can safely afford to be using in just 36 years.

One final interesting factoid in the report that reveals just how stunning the increase in global emissions have been since 1970:

The world has emitted more than twice the industrial CO2 emissions since 1970 as we did from the start of the Industrial Revolution through 1970. That is especially sobering because lags in the climate system mean we’re only now experiencing the temperature and climate changes from CO2 levels of a couple decades ago. The time to act is now.

1 Response to Climate Panel Stunner: Avoiding Climate Catastrophe Is Super Cheap — But Only If We Act Now