The 3 Most Sobering Graphics From The U.N.’s New Climate Report

The overall message of the Intergovernmental Panel on Climate Change’s newest report is simple: a rapid shift to renewable energy is needed to avert catastrophic global warming. The science behind that message, however, is less simple.

In an attempt to make the message more clear, the IPCC’s report — produced by 1250 international experts and approved by every major government in the world — uses a number of charts to get its point across. Though the charts themselves are very complex, they provide a way to visualize increases in human-caused greenhouse gases, where those gases come from, and what they could do to our climate.

Here are three of the most sobering charts from that report, and what they tell us about the state of our warming world. 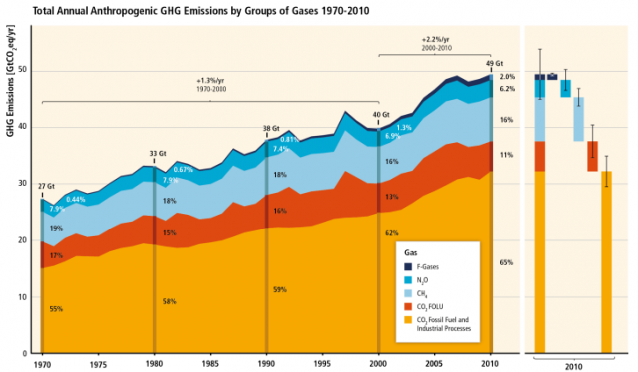 Current efforts to reduce greenhouse gases have not been enough.

This chart shows the total amount of human-caused greenhouse gases emitted into the atmosphere every year since 1970, both from burning fossil fuels and from other industrial processes.

The visualization makes clear that current efforts to reduce greenhouse gases by switching the cleaner technologies and renewable energy have not been enough, as global greenhouse gas emissions have been increasing by at least 1.3 percent every year since 1970. From 2000 to 2010, those emissions were even greater, increasing by 2.2 percent annually.

The report cites high confidence that carbon dioxide emissions from burning fossil fuels and other industrial processes contributed about 78 percent of total greenhouse gas emission increases from 1970 to 2010, and a similar percentage contribution for the more intense increases from 2000 to 2010. 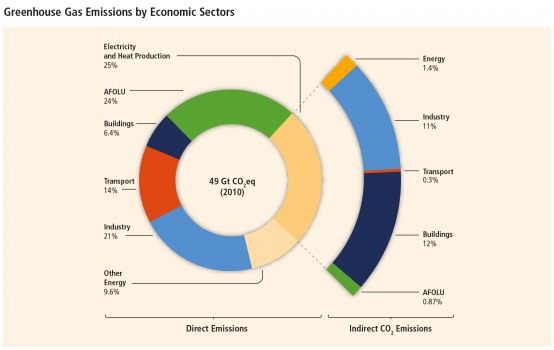 Energy supply is not the only thing driving emission increases.

The circular graph above shows the percentages that different economic sectors contribute directly to total human-caused greenhouse gas emissions, while the inner circle shows how much those sectors indirectly contribute emissions through electricity and heat production. The information is from 2010, the most recent year that data is available.

While the graph shows that energy supply contributed the most to man-made global warming (responsible for 35 percent of greenhouse gas emissions), it also makes clear that other industries are also to blame. Agriculture, forestry and other land use (AFOLU) is responsible for 24 percent of emissions. Industry, seemingly a description for general business production of goods, was responsible for 21 percent, and buildings responsible for 6 percent.

But even though industry and buildings are seemingly smaller emitters, they become larger through their indirect emissions — i.e., their use of the energy sector itself.

Big changes will be needed to avoid disaster scenarios.

On its face, this graphic looks like it does little to simplify the climate conversation. But on closer look, it shows just how much carbon we can emit in order to avoid a scenario where the world warms by more than 2°C, or 3.6°F, by the year 2100.

Each of the colored strips on this graph is a different emissions “scenario” that the IPCC has tested, where more emissions equal more warming. The little blue strip — representing a scenario where emissions concentrations stay between 430 and 480 parts per million (ppm) of carbon dioxide equivalent by 2100 — is the one we need to strive for, the IPCC says, if we are to absolutely avoid the 3.6°F warming scenario.

As the IPCC’s first report noted, continued inaction and more carbon emissions would lead to 9°F warming (or higher) for most of the U.S. and Northern Hemisphere landmass, resulting in faster sea level rise, more extreme weather, and collapse of the permafrost sink.

More about what the IPCC’s latest report says can be found here.

Ritesh Pothan, is an accomplished speaker and visionary in the Solar Energy space in India. Ritesh is from an Engineering Background with a Master’s Degree in Technology and had spent more than a decade as the Infrastructure Head for a public limited company with the last 9 years dedicated to Solar and Renewable Energy. He also runs the 2 largest India focused renewable energy groups on LinkedIn - Solar - India and Renewables - India
View all posts by Ritesh Pothan →
This entry was posted in Articles, Climate Change, Coal, Greenhouse Gases, Low Carbon Emission, Power Generation, PV, Renewables, Waste, Wind and tagged Climate Change, Greenhouse Gases, Solar. Bookmark the permalink.
<span>%d</span> bloggers like this: