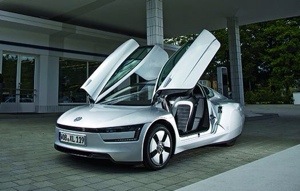 For years, automakers have worked to push fuel economy beyond 100 miles per gallon. Reaching that mark typically meant three things: cutting weight, maximizing aerodynamics, and improving powertrain efficiency. In 1999, Volkswagen engineers got close with the Lupo 3L, a three-cylinder coupe that could go 78.4 miles on one gallon of diesel. Not satisfied, VW tasked star engineer Ulrich Hackenberg, whose résumé includes work at Bentley and Bugatti, with breaking the 100mpg barrier. Hackenberg’s team crushed that goal—and then some. In tests, their new XL1 got a mind-bending 261 mpg.

The team designed nearly every part of the XL1 from scratch. To trim weight and add strength, they replaced some steel components, such as the chassis, with carbon-fiber ones. To reduce drag, they removed side-view mirrors and sculpted the body into a smooth, low-riding shape. With the car lighter and slipperier, the 830cc, two-cylinder diesel engine and the 20kW electric motor can propel the XL1 well over 500 miles on a single 2.6-gallon tank of fuel. 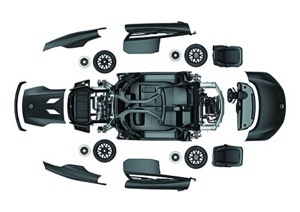 The XL1, Exploded View Courtesy Volkswagen
VW is producing a limited run of 250 XL1s for sale in Europe. U.S. safety regulations make importing the car tricky, but Hackenberg says that Americans may see the XL1’s efficient engine in future VWs.

Ritesh Pothan, is an accomplished speaker and visionary in the Solar Energy space in India. Ritesh is from an Engineering Background with a Master’s Degree in Technology and had spent more than a decade as the Infrastructure Head for a public limited company with the last 9 years dedicated to Solar and Renewable Energy. He also runs the 2 largest India focused renewable energy groups on LinkedIn - Solar - India and Renewables - India
View all posts by Ritesh Pothan →
This entry was posted in Electric and Hybrid Vehicles and tagged Electric Cars, Fossil fuel, VolksWagon, VW. Bookmark the permalink.
%d bloggers like this: