Solar power tariff has hit an all-time low of Rs. 3.47 per unit in Tamil Nadu, TANGEDCO receives bid for 1500 MW

Tangedco has received bids for more than 3,400MW now.The Tamil Nadu Electricity Regulatory Commission (TNERC) has fixed a tariff of Rs. 4 per unit for this year.

The lowest solar power tariff in the country is Rs. 2.44 per unit in Rajasthan. But in all other states, either the land cost is cheap or land is being given by the state government or the discom itself.

“We will negotiate with other bidders to bring down their rates. Only those that match our conditions will be considered,” said a senior Tangedco official.

“NLC has bid for the entire capacity of 1,500MW . After the lowest bid was known, NLC has expressed its willingness to match it. They propose to set up the park in land reclaimed from mines,” said the official.

Rassi Green is headed by G Narasimhan, a former TMC MP from Krishnagiri constituency. “We came to know that our bid is the lowest. We plan to set up 100MW capacity at Paramakudi in Ramanthapuram district, where we have land,” Narasimhan told TOI.

Apart from acquiring land, the companies face problems in sourcing funds from banks and financial institutions because of high cost of funding.”Funds are available for solar projects in foreign countries at 4% to 5%. In India, it is 9%. Only the State Bank lowered the interest rate recently to 8%,” said Narasimhan, who also heads the Solar Power Companies’ Association.

With the introduction of GST, the cost of setting up solar power projects is set to increase.

“GST rate is 5% for solar modules. It sounds reasonable and consistent. But it was 0% earlier. The GST for engineering and construction services is fixed at 3%. The impact on investments is still not clear.Our current estimate is that the total project capital cost may rise by about 4%,” said a power expert. 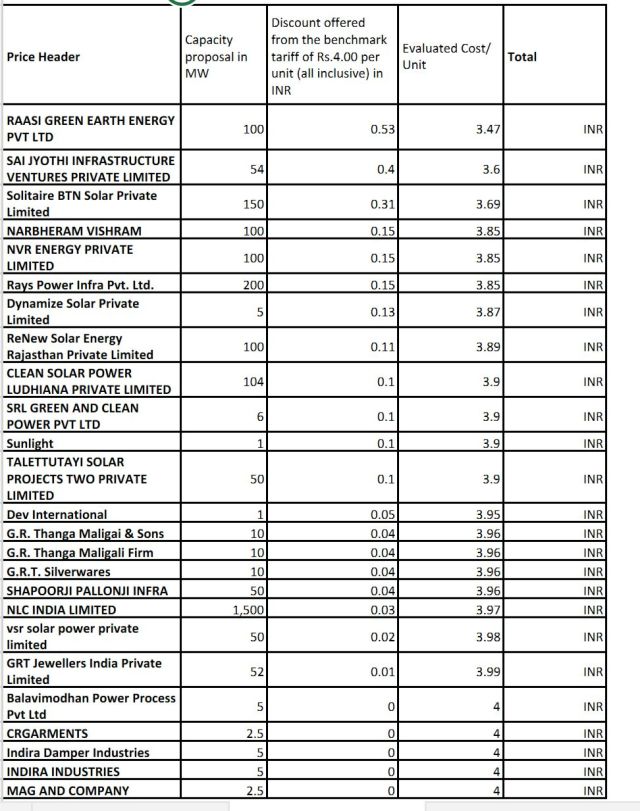 Ritesh Pothan, is an accomplished speaker and visionary in the Solar Energy space in India. Ritesh is from an Engineering Background with a Master’s Degree in Technology and had spent more than a decade as the Infrastructure Head for a public limited company with the last 9 years dedicated to Solar and Renewable Energy. He also runs the 2 largest India focused renewable energy groups on LinkedIn - Solar - India and Renewables - India
View all posts by Ritesh Pothan →
This entry was posted in DISCOM, Greenhouse Gases, GST, India, Pollution, Renewable Purchase Obligation, Renewables, Solar, Tamil Nadu and tagged GST, Krishnagiri, NLC, Paramakudi, Raasi Green Earth Energy, Ramanthapuram, Tamil Nadu Electricity Regulatory Commission (TNERC), tangedco, TNERC. Bookmark the permalink.