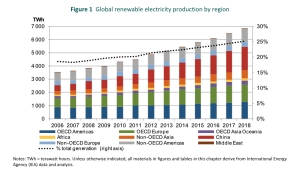 Power generation from hydro, wind, solar and other renewable sources worldwide will exceed that from gas and be twice that from nuclear by 2016, the International Energy Agency (IEA) said today in its second annual Medium-Term Renewable Energy Market Report (MTRMR).

According to the MTRMR, despite a difficult economic context, renewable power is expected to increase by 40% in the next five years. Renewables are now the fastest-growing power generation sector and will make up almost a quarter of the global power mix by 2018, up from an estimated 20% in 2011. The share of non-hydro sources such as wind, solar, bioenergy and geothermal in total power generation will double, reaching 8% by 2018, up from 4% in 2011 and just 2% in 2006.

“As their costs continue to fall, renewable power sources are increasingly standing on their own merits versus new fossil-fuel generation,” said IEA Executive Director Maria van der Hoeven as she presented the report at the Renewable Energy Finance Forum in New York. “This is good news for a global energy system that needs to become cleaner and more diversified, but it should not be an excuse for government complacency, especially among OECD countries.”

Even as the role of renewables increases across all sectors, the MTRMR cautions that renewable development is becoming more complex and faces challenges – especially in the policy arena. In several European countries with stagnating economies and energy demand, debate about the costs of renewable support policies is mounting. In addressing these issues, Ms. Van der Hoeven warned that “policy uncertainty is public enemy number one” for investors: “Many renewables no longer require high economic incentives. But they do still need long-term policies that provide a predictable and reliable market and regulatory framework compatible with societal goals,” she stated. “And worldwide subsidies for fossil fuels remain six times higher than economic incentives for renewables.”

Two main factors are driving the positive outlook for renewable power generation. First, investment and deployment are accelerating in emerging markets, where renewables help to address fast-rising electricity demand, energy diversification needs and local pollution concerns while contributing to climate change mitigation. Led by China, non-OECD countries are expected to account for two-thirds of the global increase in renewable power generation between now and 2018. Such rapid deployment is expected to more than compensate for slower growth and smooth out volatility in other areas, notably Europe and the US.

Second, in addition to the well-established competitiveness of hydropower, geothermal and bioenergy, renewables are becoming cost-competitive in a wider set of circumstances. For example, wind competes well with new fossil-fuel power plants in several markets, including Brazil, Turkey and New Zealand. Solar is attractive in markets with high peak prices for electricity, for instance, those resulting from oil-fired generation. Decentralised solar photovoltaic generation costs can be lower than retail electricity prices in a number of countries.

The MTRMR also sees gains for biofuels in transport and for renewable sources for heat, though at somewhat slower growth rates than renewable electricity. Biofuels output, adjusted for energy content, should account for nearly 4% of global oil demand for road transport in 2018, up from 3% in 2012. But advanced biofuels growth is proceeding only slowly.

As a portion of final energy consumption for heat, renewable sources, excluding traditional biomass, should rise to almost 10% in 2018, from over 8% in 2011. But the potential of renewable heat remains largely unexploited.