It’s called “urban biomass,” and it’s ours (spsmw.org). Hard to imagine a subject that would find The Wall Street Journal and Grist in line with each other’s thinking, but burning wood for energy has achieved it. Neither outlet seems to view the topic positively. Both have cited the scientific work of Dr. Mary S. Booth, a former Environmental Working Group scientist who now works for the Partnership for Policy Integrity. The basic arguments about using biomass as a source of energy have been around for some years, since bioenergy began to gain a following as an alternative to traditional fossil fuels and nuclear plants. Flags went up in 2010, for example, when a six-month study by Massachusetts environmental officials found that biomass-fired electricity might cause a 3% greater increase in carbon emissions than equivalent power from coal by 2050. (The issue does not apply to methane or algae energy generation, also biomass-based.) The controversy surprised the MA Commonwealth officials, who had thought biomass a partial answer to emissions goals. AP picked up the story, which spawned active discussion on the concepts of “carbon debt,” “carbon dividends,” and “carbon-neutral.” 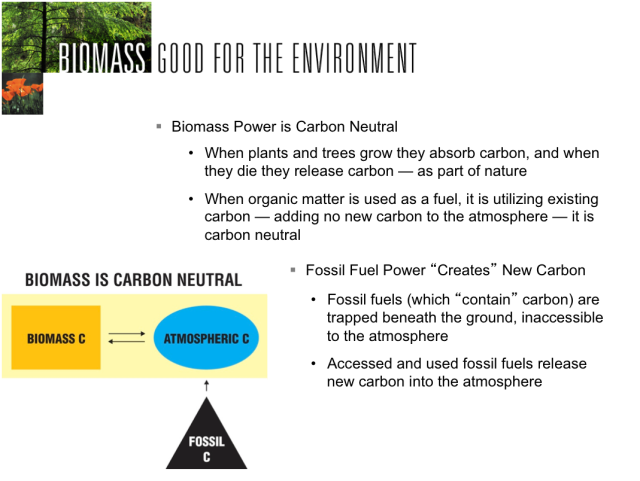 “Biomass: Good for the Environment,” from the Biomass Power Association (usabiomass.org). Almost two years ago, Justin Scheck and Ianthe Jeanne Dugan, who report on energy for The Wall Street Journal, argued against biomass because of providers’ lax compliance with emissions standards, the subsidies biomass plants receive, and the premiums they charge customers for electricity. Scheck and Dugan cited the case of Blue Lake Power in California, “among biomass plants nationwide that together have received at least $700 million in federal and state green-energy subsidies since 2009” (a drop in the bucket compared to annual fossil subsidies of $14 to $52 billion). The authors quoted Dr. Booth as advising that government agencies should withhold grants from plants that violate the standards: “Why are we subsidizing and incentivizing something that’s dirtier than coal power in certain ways?”

Debate continued, especially overseas, where the UK government had begun heavily supporting biomass power and major coal power stations had announced plans to switch to biomass fuels. These actions prompted Britain’s largest nature conservation organization (the Royal Society for the Protection of Birds) and environmental groups Friends of the Earth and Greenpeace to issue a report in 2012 (“Dirtier than Coal?“) stating that that burning whole trees (especially conifers) to generate electricity is worse for the climate than coal burning and results in 49% more emissions. The subject came up again this month, when environment writers/groups including John Upton of Grist, actforclimatejustice.org, the Global Justice Ecology Project, and so on related the publication of Dr. Booth’s recent PPI study, “Trees, Trash, and Toxics: How Biomass Energy Has Become the New Coal.” Bloomberg News also picked up the story. In her new report, Booth again casts burning wood in power plants as more damaging to air quality and the atmosphere than burning coal.

“What emerges from our analysis is a picture of an industry that despite loudly and continually proclaiming itself clean and green, is in many respects still one of the dirtiest corners of the energy industry, an industry where avoidance of pollution restrictions is tolerated, and even encouraged, by state and federal regulators.”

She makes a case we’ve heard before. This time, however, the research details a close scrutiny of 88 air emissions permits from woodburning power plants. (Reportedly, more than 9,600 facilities are currently operating in the US.) Her report has caused some concern. Booth’s calculations back up the earlier indications that for every megawatt-hour of electricity produced, even the cleanest American biomass plants pump out about 50% more carbon dioxide than plants that burn coal. She also found that the biomass plants she studied produce more than twice as much nitrogen oxide, soot, carbon monoxide, and volatile organic matter as coal plants. The Biomass Power Association of the US naturally disputes Booth’s report, saying “Biomass is a clean, renewable energy source that our nation relies upon to reduce our dependence on fossil fuels.” The industry regards “Trees, Trash, and Toxics” as “an 81-page editorial.”

It showcases a fundamental misunderstanding of the science surrounding forestry and biomass, and a lack of familiarity with the state and federal laws governing energy and the environment. Governing bodies from the State of California to the nation of Denmark rightly look to biomass as a sound, proven solution for generating clean energy while keeping forests healthy, and an essential part of any renewable energy policy. This report [by Dr. Booth] was not peer-reviewed, nor was it joined or supported by any credible national environmental organization.

For regulated pollutants—the same pollutants discussed in the PFPI report—the construction of the Cabin Creek biomass plant, which used the wood waste that traditionally had been open burned, resulted in staggering reductions in emissions—95% to 99%. Similar reductions were confirmed by Placer County in a 2011 published, peer-reviewed report in the Journal of the Air & Waste Management Association—particulate emissions by 98%, NOX emissions by 54%, CO emissions by 97%, and CO2 emission by 17%.

BPA goes on to state: “the report asserts that biomass plants can emit more ‘pollution’ than fossil-fuel fired plants. That is simply incorrect. Facilities that emit less than 250 tons [emphasized in the Booth report] are very minor contributors to overall air quality. The PSD permitting program is designed appropriately to focus on larger emitters given they are the source of the vast majority of emissions in this country.” The organization also rebuts Booth’s statements about biomass and hazardous air pollutants and the equivalence of biomass boilers and waste-burning incinerators. Several of the assumptions questioned in 2012 bear repeating and applying to the American situation as described in the 2014 report:

• All of a tree is burned for biomass energy. • Wood is the only source of biomass. • There is a defined capacity of forestland and we can’t increase or improve it. “Biomass frequently only uses parts of the trees that have no other commercial use, such as thinnings, smaller branches and off-cuts, which would otherwise be wasted. Higher demand for well-managed forests means helping forests to become more productive and even bringing currently neglected forests back into use. 60% of the UK’s forest land, for example, is currently unmanaged…. “Non-forest sources of biomass [include] energy crops and agricultural by-products…. [Also,] biomass burned for energy is sourced from by-products and residues or is a material, such as non-recyclable waste wood, that has no other economic value and therefore goes to landfill…. Alternative demand for bioenergy, often met by wood that previously had little value, can underpin the investment case for better forest management and new forest plantation.” 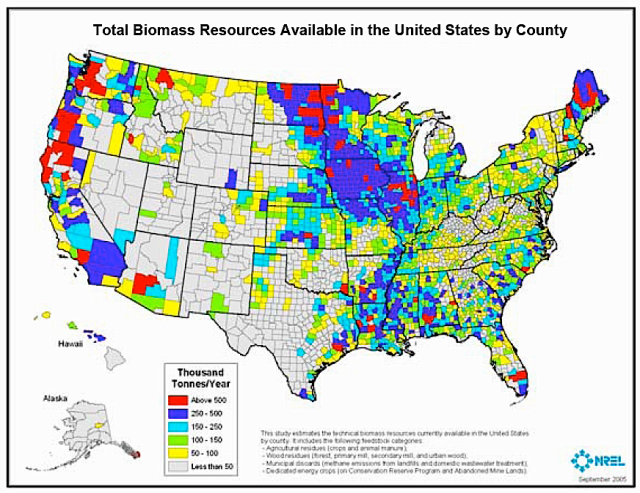 A US-focused perspective on biomass sources, the National Renewable Energy Laboratory estimated in its “Geographic Perspective” on the American biomass resource (2005) that less than 40% of American biomass feedstock came from wood. Lumber mills provided 19% of it; forest residues, 13%; and “urban wood,” 7%. Crop residues were the largest single contributor, and Conservation Reserve Program switchgrass came in next, just surpassing wood from lumber mills. The map above shows available resources by county. In 2011, The Wall Street Journal reported that renewables constituted about 8% of US energy, with 49% of the total coming from biomass. Some green theorists and organizations that usually reject carbon capture and storage schemes outright believe that their only possible use could be with biomass plants. In fact, biomass power can probably be useful as a transitional fuel without introducing untried and expensive collateral technology. Cogeneration (CHP), district heating with biomass, and new synfuel technologies appear to offer greater promise. In rebutting some of the 2012 claims, Paul Thompson, head of policy at the UK’s Renewable Energy Association, got to the real heart of the matter:

“Even when we factor in the biomass supply chain, which includes shipping and processing, its carbon footprint is dwarfed by coal.”

Coal-fired power plants in the US (powermag.com) Thompson says that the carbon debt argument ignores the importance of good forest management and the types of wood (e.g., species, age, tree parts), the many other crops, the wood waste and forest litter, the manufactured wood pellets and charcoal, even the byproducts of natural disasters like storm and wildfire that can produce viable biomass feedstock. “All biomass used for heat and power [in the UK] saves at least 60% carbon across the entire supply chain when compared to fossil fuels.” It may be prudent to rank biomass along with huge dam projects as a steppingstone to cleaner technologies, as the Chinese have recently proposed:

It also dovetails with forest issues such as sensible, sustainable woodland management, prevention of loss from wildfires and watershed disruption, safety in the rural-urban interface, forest employment potential, wildlife diversity, and other issues. The Environmental Protection Agency is revisiting restrictions on wood-burning plants this summer. Bo Peterson commented in last Sunday’s Charleston, South Carolina, Post and Courier that the EPA is in a tight spot: “The biomass industry is taking off and has wide political support. The Partnership for Policy Integrity, which issued the report, is the latest of a number environmental groups that at one point or another have questioned the looser controls on biomass, although many of the groups support biomass power to a degree.” 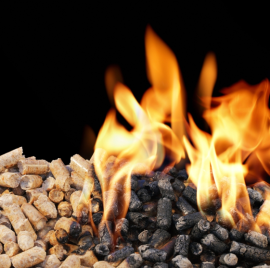 The EPA needs to work hard on the bioenergy conundrum. Having recently implemented the Burn Wise program to emphasize the importance of consumers burning the right wood, the right way, in the right wood-burning appliance—and having proposed tough rules for the nation’s nine million inefficient wood stoves and boilers—the time has come for the EPA to apply similarly sensible standards to commercial and industrial biomass burning. Ultimately, the EPA’s regulatory decisionmaking may determine the future of a significant transitional power/heating source and a nascent, fast-growing export commodity Source: CleanTechnica

Ritesh Pothan, is an accomplished speaker and visionary in the Solar Energy space in India. Ritesh is from an Engineering Background with a Master’s Degree in Technology and had spent more than a decade as the Infrastructure Head for a public limited company with the last 9 years dedicated to Solar and Renewable Energy. He also runs the 2 largest India focused renewable energy groups on LinkedIn - Solar - India and Renewables - India
View all posts by Ritesh Pothan →
This entry was posted in Articles, Biomass, Climate Change, Coal, Global Warming, Greenhouse Gases, Low Carbon Emission, Power Generation, Renewables and tagged Biomass, biomass power plants, Electricity generation, energy, environment, Forest Waste, Renewable, Renewables. Bookmark the permalink.
%d bloggers like this: