Whereas Europe had dominated annual growth for years up until 2013 (10 years, to be precise), solar PV growth was much more evenly split last year, and China actually topped the tables. 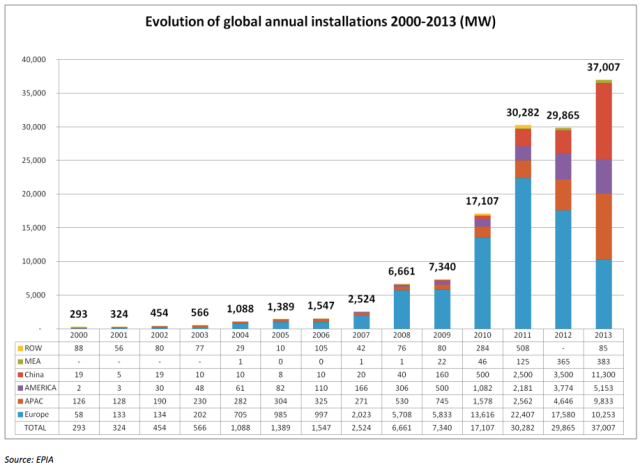 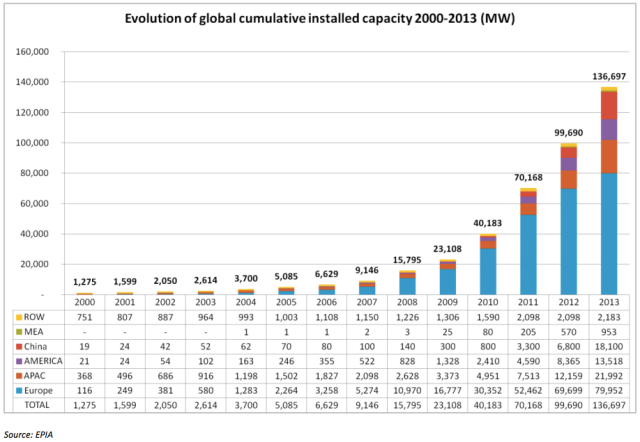 “While Europe concentrated more than 70% of the world’s new PV installations in 2011 and still around 59% a year later, with more than 10 GW of new capacity installed in 2013, Europe only accounted for 28% of the world’s market.” Nonetheless, Europe still saw fairly large growth in solar PV capacity, especially when you compare that to most other energy sources. Here’s a chart showing net generation capacity change in the EU 28 for various energy sources: 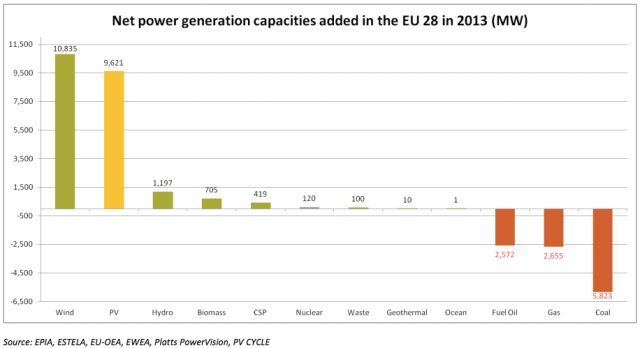 Nonetheless, there’s no denying the EU market was not nearly as strong in 2013 as in previous years. Austerity measures have been especially harmful. EPIA notes: “European PV markets have experienced a slowdown. In a number of European countries, this can be explained by harmful and retrospective measures that have badly affected investors’ confidence and PV investments viability. Italy in particular experienced a 70% market decrease compared to the year before. Germany also experienced in 2013 a steep PV market decrease (57% decrease compared to 2012).”

Note that these aren’t final numbers. “EPIA will publish in June 2014 consolidated and detailed historical figures and forecasts in its ‘Global Market Outlook for Photovoltaics 2014-2018′ report,” the preliminary report states.

Here are some other notes from the EPIA preliminary report:

Check out the full EPIA report for more.

And for a related but different look at solar PV growth in 2013, as well as projections for 2014, also see: “Solar Power Breaks World Record In Q1, IHS Raises 2014 Forecast To 46,000 MW.” From that article, here’s a chart on quarterly growth over the past few years and projected growth up through Q1 2015: 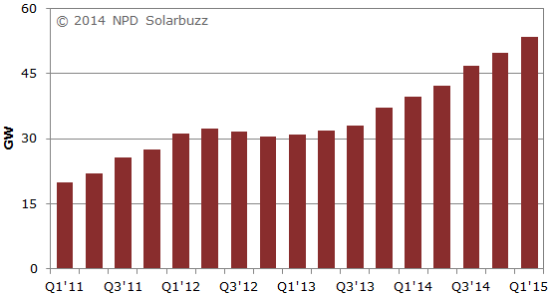 Ritesh Pothan, is an accomplished speaker and visionary in the Solar Energy space in India. Ritesh is from an Engineering Background with a Master’s Degree in Technology and had spent more than a decade as the Infrastructure Head for a public limited company with the last 9 years dedicated to Solar and Renewable Energy. He also runs the 2 largest India focused renewable energy groups on LinkedIn - Solar - India and Renewables - India
View all posts by Ritesh Pothan →
This entry was posted in Articles, Grid Interactive Distributed Solar Energy Systems, PV, Rooftop, Solar, Transmission and Distribution and tagged GW, Photovoltaic, Renewable Energy, Renewables, solar power plants, Solar PV, Wind Power. Bookmark the permalink.
Loading Comments...