The Commission had invited suggestions and objections from consumers and all other stakeholders and held Public Hearings at Amravati, Nagpur, Aurangabad, Nashik, Pune and Navi Mumbai during the period from 18 March, 2015 to 10 April, 2015.

The Commission has taken due cognisance of all the issues raised by the stakeholders during the public process, and has addressed relevant Tariff related issues in the MYT Order dated 26 June, 2015. The revised Tariffs shall come into force from 1 June, 2015.

The salient features of the Commission’s Order are as follows:

1. The Commission has been guided by the principles of ensuring that consumers are not burdened with the impact of unnecessary tariff increase, while at the same time, the financial health and credibility of the Licensees as well as the ability to serve the consumer is not adversely affected.

2. The Commission has determined the ARR and category-wise Tariff for consumers of the Licensees in accordance with the Electricity Act, 2003, MERC MYT Regulations, 2011, Judgments issued by the higher Courts / Appellate Tribunal for Electricity, and Tariff Policy notified by the Government of India.

3. The expenses incurred by the Licensees have been allowed after prudence check and in accordance with the normative expenses allowed in the MERC MYT Regulations, which are linked to achievement of normative operational performance levels for Distribution Loss, O&M expenses and other stated parameters.

4. Based on prudence check of MSEDCL’s expenses and detailed analysis of its projected revenue and expenditure, the Commission has approved a cumulative revenue surplus of Rs. 3,376 Crore for MSEDCL for FY 2015-16, as compared to cumulative revenue gap of Rs. 4,717 Crore projected by MSEDCL in its Petition.

5. MSEDCL has sought an increase of 7.94% in Tariff for FY 2015-16 over the Tariff at the time of filing of the Petition (February, 2015). As against this the Commission has approved reduction of 5.75%. However, with reference to the Tariff of April 2015, overall reduction in Tariff approved by the Commission works out to 2.44%.

6. This reduction is mainly on account of the followings:
a. The Commission has adopted Merit Order Despatch Principles for projecting power purchase requirement for FY 2015-16. Also, unsubstantiated increase in Agriculture Sales for the second half of FY 2014-15 projected by MSEDCL have not been considered. This leads to disallowance of Rs. 5,331 Crore in power purchase expenses.
b. Transmission Charges approved by the Commission in its latest InSTS Order in suo-motu Case No. 57 of 2015 for MSEDCL is Rs. 3601 Crore, as compared to Rs. 6,294 Crore sought by MSEDCL for FY 2015-16 in its Petition. This lead to reduction of Rs. 2,693 Crore in Transmission Charges.
c. The Commission has disallowed Rs. 1,909 Crore claimed by MSEDCL towards Delayed Payment Charges payable to Generating Companies and Transmission Licensees. While doing so, the Commission expresses serious concern regarding the practice of delaying the regular payment which subsequently attract Delayed Payment Charges for various stakeholders.
d. The Commission observes that the Tariff of all stakeholders is determined on Cost plus Method therefore it is not clear to the Commission as to why utilities delay in making timely payments as laid down in agreement or Order. The Commission is of the view that stakeholders are required to device an effective mechanism to curb this unfortunate practice and to ensure that timely payment is made to all parties. The MSEDCL is directed to lay down a transparent system to ensure the regularity of payments. This will not only negate the need for Delayed Payment Charges but will also enable all stakeholders to plan their finances in a reasonable and cost effective manner.
e. Stakeholders are also directed to follow the directives issued by the Commission in para 79 of InSTS Order (Case No. 57 of 2015) where the Commission have made specific comments on delayed payment and steps to control them.

8. The Commission has taken note of views expressed by Industries that Tariff for industries (HT and LT) are higher in Maharashtra in comparison with neighbouring States. Electricity charges play an important role in competitiveness of Industry. With significant increase in availability of power in the State and with projected revenue surplus, the Commission has reduced the Energy Charges for Industry in a range of Rs. 0. 40 per kWh to Rs. 1.21 per kWh (depending upon consumer sub-category) with a marginal increase in Demand Charges in the range of Rs. 0.03 per kWh to Rs. 0.04 per kWh. This leads to an average 7% to 10% reduction in Consumer Tariff for various sub-categories of Industries. The Commission hopes that this will play a catalyst role in Industrial growth of Maharashtra.

9. The Commission has reduced Energy Charges for residential category consumers particularly for consumers with consumption below 100 units per month, and only marginally increased it for 101-300 units consumption slab, while there has been a marginal increase in Fixed Charges, it has been ensured that electricity billed amount (Fixed Charge + Energy Charge) for residential consumers consuming less than 300 units is not increased. Further, the Commission has retained the benefit of telescopic slabs, which will benefit all residential category consumers.

12. Considering the difficulties and challenges faced with regard to providing adequate water, particularly in the rural areas (through Rural Water Supply schemes), Public Water Works need to be facilitated and the tariff for this category has been maintained below the ACoS.

14. Tariff for HT Commercial has been reduced by 7-10%. At the same time Tariff for low end Commercial category (below 20 kW) has been marginally increased by 1%. The Commission hopes that these lower Tariffs will be helpful for growth of service and hospitality sector in the State thereby create employment.

18. The Commission has observed that the current formula of determining the Cross-Subsidy Surcharge (CSS) is a major hurdle to consumers wishing to avail Open Access. This appears to contradict the mandate of the Electricity Act, 2003. Hence, the Commission has taken a considered decision to deviate from the existing formula of determining CSS. This is expected to cushion the impact on CSS which would have resulted from application of the formula applied earlier, and better facilitate OA.

21. The Commission has always been acutely aware of the need of providing Tariff support to Agriculture sector. Therefore, the electricity tariff for Agriculture sector has consistently been kept very low as compared to the ACoS. The Commission is also aware of the fact that in addition to lower tariff fixed by the Commission, Government of Maharashtra is providing direct subsidy under Section 65 of the Electricity Act, 2003 in order to provide additional relief to agriculture sector. However it is noticed that despite the subsidy, the residual recovery from the agriculture sector is only around 38% of the dues. Agricultural consumption is approximately 24 % of the total electricity sales of MSEDCL. The lower recovery here severely affects the finances of the utility. The Commission feels that it is necessary for the Government to address the issue seriously and perhaps be more focused in its distribution of subsidy. There is a possibility that the time has come for Government to consider categorisation of agriculture subsidy based on some transparent objective criteria.

22. The Commission has reduced Cross-Subsidy levels as per the provisions of the Electricity Act, 2003.

23. The comparison of existing and revised Tariffs for FY 2015-16 applicable for MSEDCL’s consumers has been given in Annexure 1.

24. Sample calculation indicating change in electricity bill amount for individual consumers due to revision in Tariff has been given in Annexure 2. 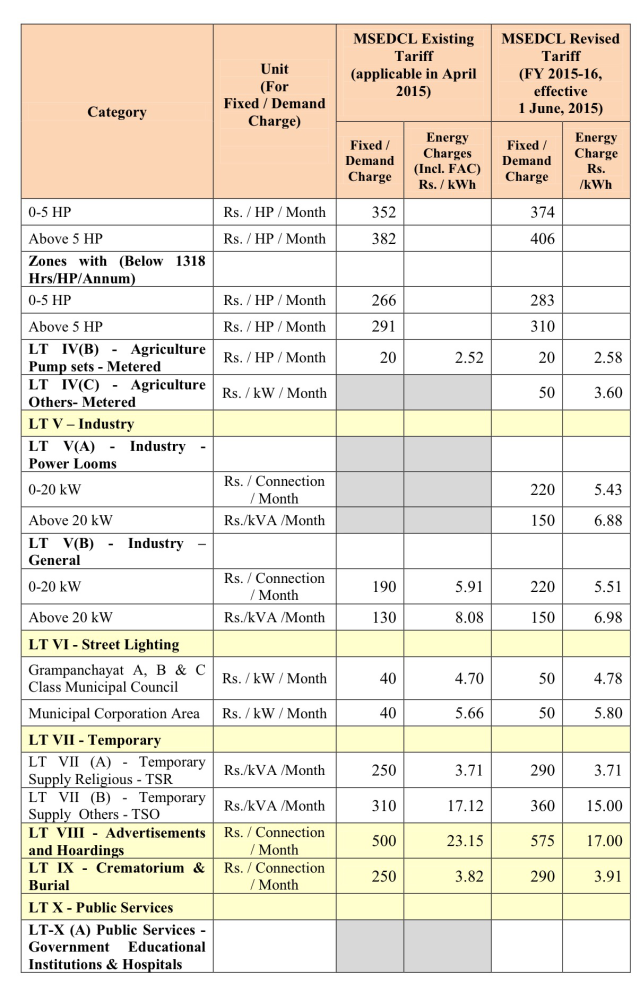 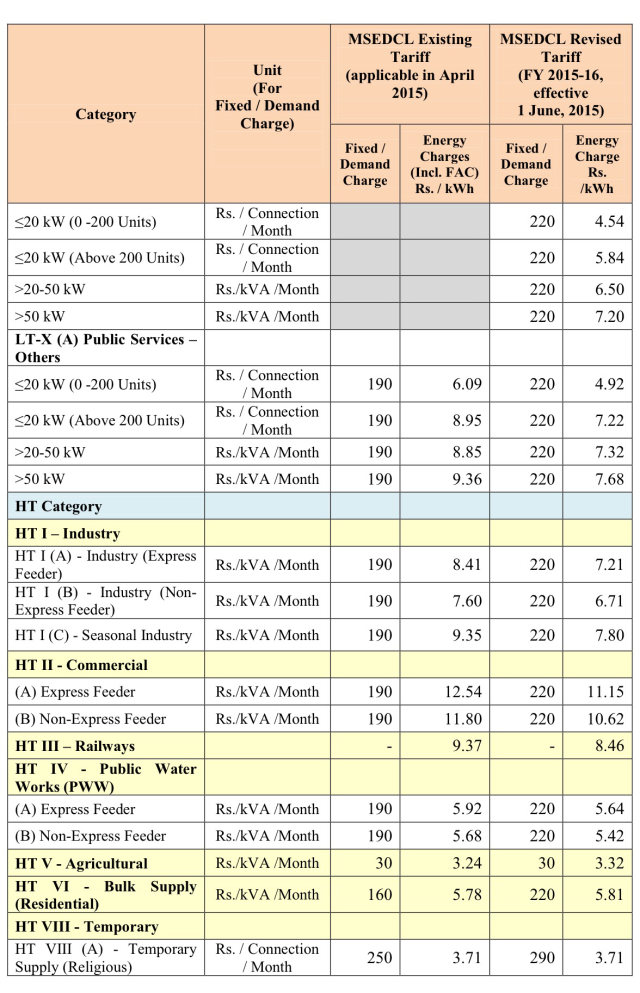