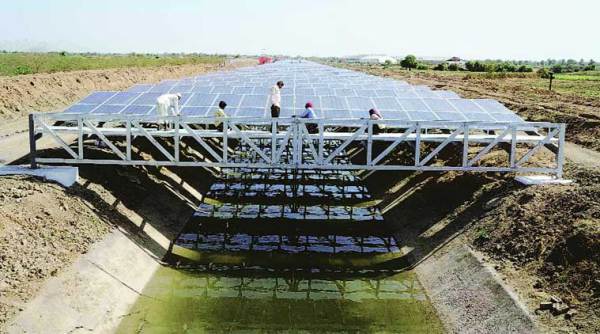 The country plans to install 100 GW capacity of solar-generated electricity by 2022, a five-time increase from a previous target.

India’s plan to install 100 GW capacity of solar-generated electricity by 2022, a five-time increase from a previous target, only follows a global trend that has seen a sudden and massive jump in the deployment of solar power in the last four years.

According to figures published by the International Energy Agency (IEA) a few months ago, more than 36 GW of new solar capacity was added in 2013, or about 100 MW per day (see box).

This explosion has led to projections for the future being revised upwards by significant amounts. In 2010, the IEA had said that by 2020, about 210 GW of solar electricity would be installed. Now, that target is likely to be achieved this year itself. In its latest projection, in 2014, the IEA said the total installed capacity in 2020 would easily exceed 400 GW.

The main reason for this surge in deployment of solar-generated electricity has been a sharp decline in prices of photo-voltaic systems, which has made electricity produced by solar energy comparable in costs to traditional sources like coal or oil. According to IEA figures, the prices have dropped to a third of their 2008 levels. In some countries, prices have reduced by as much as 80 per cent in the last five years.

It is this global context that makes India’s 100 GW target for 2022 look within striking distance, despite the fact that more than three years after it had launched the National Solar Mission, only 3 GW of solar capacity had been installed in the country till November 2014.

“100 GW by 2022 is a very ambitious target but not unachievable. A lot needs to be done at the government level, including a push for domestic manufacturing of photo-voltaic units which will drive down prices further. A massive capacity building exercise also needs to be undertaken,” Amit Kumar, Adjunct Professor at TERI University, said.

In fact, looking at the global trend, the IEA had, in another report last year, said India could easily install 50 GW of solar capacity by 2022 instead of the 20 GW it was targeting at that time.

“However, reaching 100 GW by 2022 would represent a considerable acceleration of newly built solar capacity to 20 GW per year in the next couple of years. India is currently installing about 15 GW per year from all technologies. The government’s aim to reach 100 GW of solar capacity is ambitious,” Cedric Philibert of Renewable Energy Division of the IEA told The Indian Express.

“Based on our information, the government expects that among the 100 GW total capacity, about 40 GW would come from residential rooftop units. We believe that adding 5 GW per year from distributed PV (rooftops) is not impossible for such a large country… But this would also imply a concerted government effort,” Philibert said.

“Achieving 100 GW would require a number of accompanying policy initiatives… to address reforms to facilitate trade of power among private parties and consumers,” he said.

Some policy changes are already being put in place. Last month, the government approved amendments to the Electricity Act, 2003 with several provisions to boost the generation and use of renewable energy. The cabinet also cleared a scheme to set up 25 solar parks, with a capacity of 500 MW or above each.

The government is also pushing for Renewable Generation Obligations (RGOs) that will force power producers to generate a part of their electricity through renewable energy.

Simultaneously, efforts are being made to boost domestic production of PV cells and units. One reason for the decline in global prices of PV units has been the shifting of manufacturing from the western countries to China. “Chinese manufactured PV units are now serving about two-thirds of the global market,” said one government official.

Huge demand for solar units has also driven down prices.

India is also in a position to manufacture PV units cheaply, at prices comparable to Chinese products. Last month, the government announced that defence establishments and para-military forces would be eligible for viable gap funding (VGF) to set up solar power plants of 300 MW capacities if they ensure that PV cells and modules are manufactured domestically.

“Solar manufacturing can become a crucial part of the Make in India strategy. The 100-GW target is an aspirational one. Even if we achieve around 80 or 90 GW at 2022, it would be very significant and useful, not just from climate change point of view but also for India’s energy security and overall economy,” said Kumar.